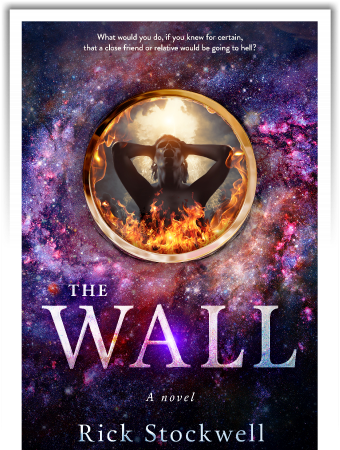 The Wall A Novel by Rick Stockwell

What would you do, if you knew for certain, that a close friend or relative would be going to hell?

“After a serious auto accident, Jackson Trotman is taken by his guardian angel into the heavenly realms, to a place called The Wall. There he is able to travel into the past, present, or future of anyone who has ever lived, and he discovers that many of his friends—including his future wife—are destined for hell. He vows to rescue them from their fate, no matter the cost.”

"Rick asked me if I would be willing to read a copy of The Wall. I agreed to do so with the caveat that it would take me some time, as I was in the middle of several other projects. Once I started reading the book, I quickly became engrossed. The Wall is a real "page-turner" that is sure to captivate the imagination of anyone who reads this wonderful book." - BOB SULLIVAN, author of Escape the Global Storm

Marine First Lieutenant Jackson Trotman lay prone on a precipice overlooking a valley. His second-in-command, Gunnery Sergeant Cooke, lay by his side. The twelve marines in their patrol were already dispersed around the mountainside behind them.

The scraggly brown rocks dug into his chest, arms, and legs like porcupine quills. Dust covered him from head to toe, and only his shemagh kept him from breathing in the superheated air and fine dust. There wasn’t a speck of green or a drop of water anywhere. The slight breeze gave little reprieve from the temperature of one hundred and fifteen degrees. The sun beat down without mercy, cooking him and his unit like bacon in a frying pan.

He stared through his desert binoculars at the dirt trail far below. Their mission was to interdict and neutralize Taliban forces in the area, and they had received an intelligence report that an insurgent patrol was on the move nearby.

Gunnery Sergeant Cooke turned to him. “Got a question for you, sir. How’d a nice college boy like you end up a jarhead in a hellhole like this?”

“Just serving my country, Gunny, with the finest fighting force in the world.”

Cooke shook his head and rolled his eyes. “Uh-huh.”

Jackson chuckled. “Not buying it?”

Jackson tilted his head. “The abundance of alcohol in Afghanistan?”

“It’s a dry country in more ways than one, Lieutenant. Was it a girl?”

An image of McKenzie Baker sunbathing at State Beach on Block Island popped into his mind. He’d dated many women, but for some reason, the memory of her resonated more than the others. Ridiculous. We only went on one date, and she blew me off. Why am I even wasting my time thinking about her?

“Yeah, it was a girl, Gunny. I got a Dear John letter from my female dog, and that threw me over the edge.”

Cooke snickered and didn’t press the matter any further.

Finally, Jackson turned to face him. “Nothing much happening here. Let’s move to Checkpoint Bravo. Are we good to go?”

Jackson pointed down the mountain to his left. “Let’s move out. It’s down by that small hill over there.”

“Roger that.” Cooke addressed the rest of the patrol. “Okay, marines. Mount up!”

The group began their descent and reached the trail below about fifteen minutes later. Jackson had already divided his men into their three fire teams, each comprised of four marines. He then got down on one knee, listened for a few moments, and reconnoitered the area with his binoculars. Without much cover where they stood, he had to make sure his unit got to the checkpoint as safely as possible.

No sound or movement to signify trouble. Jackson kept a wary eye on the surrounding terrain. When they reached Checkpoint Bravo, he relaxed a little. The small hill had plenty of boulders for cover. He sat down against a large rock, tipped back his helmet, and retrieved his canteen. Right as he took a swig, rocks exploded and splintered all around him, followed by the pat-pat-pat of machine-gun fire from nearby.

Jackson jumped up and swiveled around the boulder to the opposite side. “Incoming! Incoming! Take cover!”

The distinctive blam-blam-blam of a DShK .50 caliber machine gun came next. The rounds pulverized the boulder that was supposedly protecting him, and he peered around the lower edge of it, hoping his head wouldn’t get blown off. “Gunny, direct your fire to the top of that hill! I’m calling for artillery support.”

Jackson shouted into his headset, “Johnson!” Jackson pointed. “Call for artillery and lay it on that hill over there.” He ducked as low to the ground as he could, cringing as bullets whizzed over his head.

His earpiece crackled. “Will do, sir.”

“Make it quick!” Rounds fired by his marines impacted the hill while enemy bullets continued zipping through the air overhead. A cacophony of gunfire and smoke filled the air.

A few minutes later, high-explosive ordnance from the 155-mm howitzers zoomed through the air directly above Jackson’s head, howling like a freight train, then impacted close to the target, causing a massive plume of rock, dirt, and dust to erupt into the air. The enemy gunfire ceased for a moment.

Then another shell exploded directly on the target.

Multiple rounds pummeled the enemy position in succession, sending dirt and shrapnel flying all over the target area. Jackson and his men cheered. After a momentary lull in the barrage, some enemy survivors scrambled out of their holes and ran.

Jackson adjusted his helmet, then shouted to his marines. “Fire Team One, open fire, over.”

Withering small arms fire cut down several Taliban soldiers, while others ran directly into the artillery barrage. The remaining stragglers scattered in various directions. Fire Team One picked off several more, but a few escaped.

The Fire Team One leader nodded. “Roger that, prepare for a counterattack,”